Properties and Applications of Quantum Dots

Quantum dots (QDs) are often referred to very tiny man-made semiconductor particles, whose size are normally no more than 10 nanometers. Their extremely small size renders their optical and electronic properties different from those of bulk materials. A majority of QDs have the ability to emit light of specific wavelengths if excited by light or electricity. According to existing literature, the electronic characteristics of QDs are determined by their size and shape, which means we can control their emission wavelengths by tuning their size. Typically, smaller QDs (e.g., radius of 2~3 nm) emit shorter wavelengths generating colors such as violet, blue or green. While bigger QDs (e.g., radius of 5~6 nm) emit longer wavelengths generating colors like yellow, orange or red. Their highly tunable optical properties based on their size are fascinating, leading to a variety of research and commercial applications including bioimaging, solar cells, LEDs, diode lasers, and transistors. 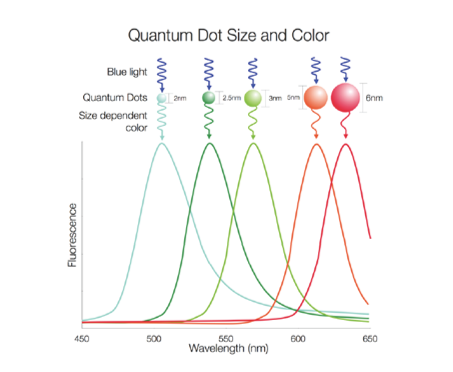 In semiconducting materials, they possess intrinsic band gap, and the electrons are able to be excited from the valence to the conduct band by absorbing incident light, leaving behind a hole. The electron and the hole can bind to each other to form an exciton. A photon with longer wavelength will be emitted when this exciton recombines (i.e. the excited electron returns to its ground state). This phenomenon is known as Fluorescence. However, unlike bulk semiconducting materials, QDs are too sparse to create the continuous valence and conduct band. Generally, the smaller the particle size the larger the band gap. As the emission wavelength depends on the QDs’ size, their fluorescence can be readily controlled by changing their size during the synthesis process. 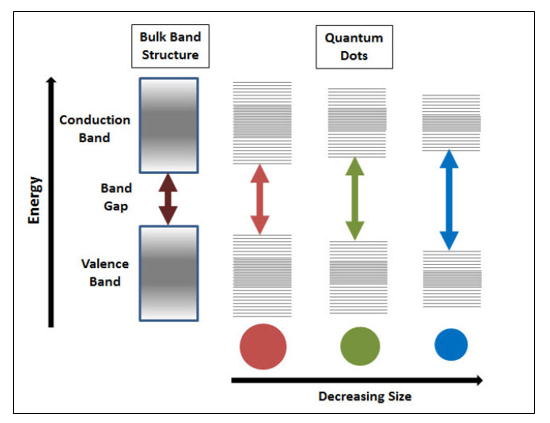 Figure 2. The electronic structure of quantum dots varies with the size of dots.

The emission wavelengths of QDs span from the ultraviolet (UV) to the infrared (IR). Other properties of QDs include high quantum yield, high photostability, and high molar extinction coefficients. Their emissions are also relatively narrow and symmetrical at specific wavelengths. In addition, it is reported that the fluorescence quantum yield of QDs can be improved through building a “shell” of a larger band gap semiconductor material around them.

Various kinds of organic dyes have been used in bioimaging for decades. However, most of the organic dyes suffer from low quantum yield and photostability. However, with the advancement of nanotechnology, QDs have been considered to be superior to traditional organic dyes in many respects. For example, it has been found that QDs are 20 times brighter and 100 times more stable more than traditional fluorescent reporters. With well-established inorganic synthetic techniques now are available for generating QDs with high brightness. For bioimaging applications, the fluorescent probes have to remain well-dispersed and stable in the aqueous medium with a wide range of pH and ionic strengths. Fortunately, numerous approaches have been developed to make the QDs water-dispersible. Up until now, great efforts have been devoted to employing QDs for in vitro and in vivo imaging, which are expected to be important to the diagnoses of many diseases, the understanding of embryogenesis, and lymphocyte immunology.

Because of the tunable of the absorption spectrum and high extinction coefficient, QDs are desirable for light harvesting, is beneficial for photovoltaic devices. QDs have the potential to boost the efficiency of silicon photovoltaic cells and lead to reduced costs.

QDs are promising for light emitting devices and may improve the performance of light-emitting diode (LED), leading to the new design of “Quantum Dot light Emitting Diode”. QDs are very useful for display devices considering their unique optical properties. They are capable of presenting visibly more accurate and outstanding colors. A proof-of-concept QDs display has been successfully achieved from technical perspective years ago, and shows a good performance and bright emission in the region of visible and near infrared spectrum.

Please do not hesitate to contact us if you need free consultation and a detailed quotation of your project. Our customer service representatives are available 24 hours a day, from Monday to Sunday.