Cell separation isolates cells according to their properties. Current researchers isolate cells to study the characteristics or biological processes of a certain cell population. Other applications, such as cell therapy, are also under rapid development. Several cell separation approaches have been developed.

Traditional FACS separates cells based on their fluorescent characters. Cell mixtures are funneled single-file through a narrow opening that ends in a nozzle, after which, cells are broken into individual cell droplets. As the droplet falls, a laser (or several lasers) is applied to recognize the cells one by one based on their characters. The scatter of the laser light and the fluorescent signal tell the system which population each cell belongs to. Then, the identified droplet passes through an electrostatic deflection system and the computer directs the instrument to send the droplet to the appropriate cell collector. 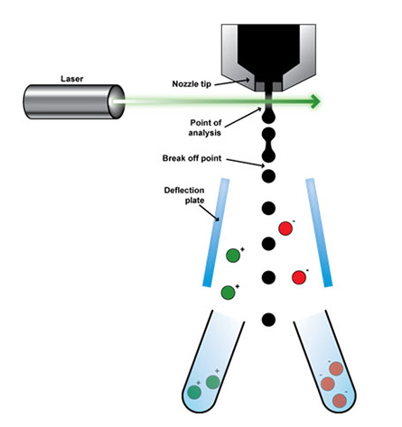 Organic fluorescent dyes, such as rhodamine and fluorine, are the most common fluorescence tags employed in FACS. Various organic fluorescent dye-labeled antibodies have been commercialized and are readily available in the market. However, in some studies, photoblinking and photobleaching have become big obstructers while manipulating these fluorophores. Therefore, quantum dots and upconverting nanoparticles stand out by their robust resistance to photoblinking and photobleaching.

QDs are nano-sized semiconductor particles with conspicuous optical and electronic property differences from those of larger particles. Similar to organic fluorescent dyes, many types of QDs emit light of specific frequencies once they are excited by a light of shorter wavelength. This fluorescence property can be precisely tuned by changing the QDs’ size, shape and material, which attracted great interest in research applications. Meanwhile, compared to traditional organic fluorescent dyes which can photobleach after absorbing 105–106 photons, CdSe/ZnS QD can undergo up to 108 photon absorption and exhibit 100 times longer lifetime.

Opposite to traditional fluorescent dyes, UCNPs exhibit photon upconversion. Two or more incident photons of relatively low energy are absorbed and converted into one emitted photon with higher energy, resulting in an absorption in the infrared and an emission in the visible or ultraviolet regions of the electromagnetic spectrum. Their excitation and emission wavelengths can also be changed by tuning their size, shape and material. Therefore, UCNPs can be applied in various applications, such as FACS.

FACS classifies and sorts sequentially, which is precious but time-consuming. Especially when it comes to bulk samples, the protracted separation process using FACS may cause cell clumping, losing viability and even cell death. Thus, immunomagnetic cell separation stands out by its high-speed separation ability, which can sort cells simultaneously.

In immunomagnetic cell separation, magnetic particles were characterized with various cell binding ligands, which can recognize a specific cells population of interest. By incubating these particles, the target cells can be magnetically labeled. Therefore, by the application of a magnetic field, these cells can be displaced and separated from mixtures.

Positive cell separation isolates the cells of interest. Magnetic particles bind to the target cells and the whole particle-cell complexes are removed rapidly and mildly from mixtures by the application of a magnetic field.

Negative cell separation isolates the unwanted cells from the mixtures. In this approach, negative cells are magnetically labeled, separated and discarded, leaving behind a purer sample of the cells of interest. No beads are left in the final product.

Several cell surface receptors have been identified as the biomarkers of a certain cell population. Thus, their corresponding antibodies are conjugated to particles to magnetically label these cells.

Our company provides customized primary antibody conjugation service to assist you immobilizing your desired antibodies on magnetic particles. Find our service at the link below:
Immobilization of Antibody on Beads

The streptavidin-biotin binding is the strongest known non-covalent interaction between a protein and ligand and has been exploited for use in many bioseparation processes. A variety of biotinylated primary antibodies have been commercialized and readily available in the market. Avidin/streptavidin-modified magnetic particles can bind to biotinylated antibody-pretreated cells and isolate the target cell by the application of a magnetic field.

Current market offers a variety of magnetic particles with their size ranging from 50nm to several micrometers. A debated on which size range should be chosen for cell separation rises.

On the other hand, another group of scholars argued that the nano-sized particles may be internalized by the cells during incubation. These internalized particles can enter the cell nuclei and influence cell biological processes, leading to an altered cell nature status and even cell death. Whereas, micro-sized particles, since they are roughly the same size as mammalian cells, are less likely to be taken up by the cells. Thus, micro-sized particles should exhibit less influence on the nature status of cells. Meantime, larger particles have a higher magnetic mobility and are capable of separating cells from viscous mixtures.

The table below compared nano- and micro-sized particles in the application of cell separation.

Please do not hesitate to contact us if you need free consultation and a detailed quotation of your project. Our customer service representatives are available 24 hours a day, from Monday to Sunday.