Creative Diagnostics offers a series of Self-Assembled Monolayers (SAM) Reagents formed with thiol and disulfide derivatives. Self-Assembled Monolayers are prepared by immersing a clean gold-coated glass plate into a dilute solution of the desired thiol. SAM can be formed with different terminal function groups through various alkanethiol derivatives (collectively called SAM Formation Reagents), to generate a monolayer surface with functionality that is able to attach biological molecules for biosensor construction. SAM Formation Reagents which are already optimized in one bottle and simple to use. The optimized reagent can reduce unspecific binding significantly.

Self-assembled monolayers (SAMs) are a single layer of highly ordered molecules of a surfactant formed spontaneously on a substrate when exposed to a surfactant solution. The procedure for preparation of SAMs on gold is simple, no special equipment is required to prepare SAM layers, explained below. The resulting monolayer is an extremely dense-packed, crystalline monolayer.
(1) Prepare a gold-coated glass plate pre-washed with Piranha solution.
(2) Immerse the gold-coated glass plate in thiol derivative solution for 30 min - 4 h.
(3) Wash the SAM-coated plate with ethanol and then distilled water.
(4) Dry the plate under nitrogen as necessary. 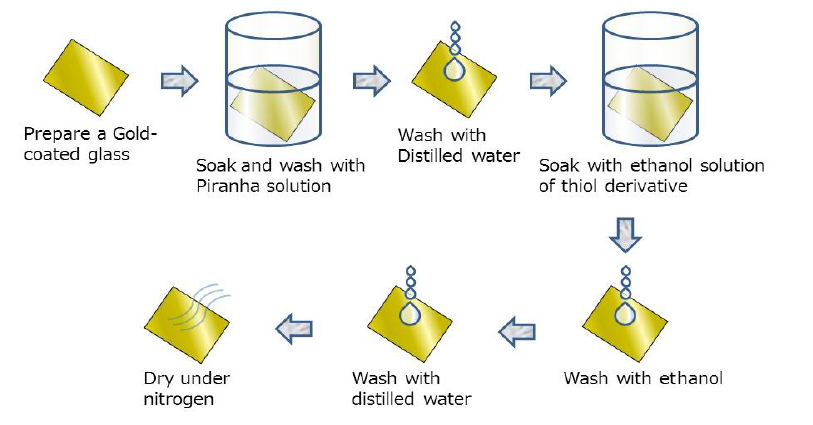 Since the discovery of SAMs, the SAMs technique has been widely used in wetting, adhesion, corrosion, catalysis, nanolithography and biosensors. The popularity of thiols on gold SAMs can be attributed to several reasons. First, the SAMs formation and preparation is simple, reliable and reproducible. Second, it is easy to control the surface density of the functional groups and molecular environment. Third, it is very flexible to generate a wide variety of biosurfaces when SAMs are chosen as the platform.

There are three common ways to immobilize a protein on a Surface Plasmon Resonance (SPR) or Quartz Crystal Microbalance (QCM) biosensor consisting of Self-Assembled Monolayer (SAM);
1) Formation of covalent bond of amine functions on proteins and activated carboxy-SAM;
2) Immobilize proteins by His-Tag through Ni-NTA-terminated SAM;
3) Immobilization of proteins through Biotin and Avidin interaction. Because the Biotin-Avidin formation is known as a facile reaction, it is widely utilized for immobilization of protein.